Under normal circumstances, I’m not a political animal. If there’s a gene for passionate political engagement, I don’t have it. I vote, I pay my taxes, I serve on a jury if I’m called, and I try to behave myself in public so as not to disturb the peace.

But these, as has been amply demonstrated, are not normal times, which is why our front yard currently looks like this:

There’s not much else to say, really. I’ve known since 2016 that I would be voting for whoever the Democratic party chose to run in 2020, up to and including a well-behaved golden retriever.

The cabin fever got strong in us this week, so today Jim Macdonald and I went on a six-hour-plus road trip to eat take-out food that didn’t come from our little town – just him and me and our masks in our comfy blue Subaru.

First we drove to North Conway, admiring the foliage all the way, starting at 9AM in order to reach Luchador Tacos not long after opening time.

We ate all by ourselves at a shady outside table.  Macdonald had a cheese quesadilla with guacamole and pico de gallo on the side, and I had a pork burrito bowl with all the usual burrito stuffings minus the tortilla.   We also had Jarritos Mexican soft drinks to go with, plus extra chips and – you guessed it – guacamole.

After we were finished there, we continued driving southward and admiring the foliage until we reached the WingStop in Manchester, where we ordered the big All-In Special, featuring two flavors of boneless wings and two flavors of chicken tenders, plus fries and lemonade. While it was being prepped, we took turns – masked, of course – looking at the stuff available in the craft beer store next door, and purchased a four-pack of Backwoods Bastard brown ale for later consumption.

Then we drove home, snacking on the wings and tenders en route.  The order was large enough that we’ve got enough left over in the refrigerator to handle breakfast and lunch tomorrow as well, so that’s good.

Now I am having a Lemon Drop that Macdonald made for me, and am feeling considerably less cabin-feverish than I was before we left.

(We weren’t the only people out admiring the fall foliage.  When we were passing through Crawford Notch and later through Franconia Notch, there were so many trail hikers out that they had to set up overflow parking for them.  Lots of Massachusetts plates in evidence.  Most of the hikers we saw were properly masked, which is good, though I can’t say the same about the ATV riders.)

That’s the maple at the foot of our driveway, which is always one of the first trees in town to turn. We’re supposed to have night-time temperatures in the forties (Fahrenheit) all weekend.

. . . while they’re working on the complete replacement/restructuring of the entire US police system:

They could get rid of all the SWAT teams and other similar units out there.  Because the kind of incident that really requires a massively armed police response is fairly rare (to the point of being, most of the time, nonexistent) – but if you’ve got a dedicated unit meant for just that purpose, they’re not going to want to sit around waiting for that maybe one day out of a year when they might be needed.  And heaven forbid a so-called elite unit should go back to directing traffic and pulling cats out of trees instead of doing macho stuff with body armor and heavy weaponry.

So instead, they end up getting called out for all sorts of things, and make things worse as often as or oftener than they make things better.

One of the good things about life up here in far northern New Hampshire is that if we want a SWAT team, we have to send down to Concord for one, and it takes them three hours to get here.  So mostly we don’t bother, and it works just fine.  We’ve had a couple of so-called “armed standoffs” over the years – there was the guy who was supposed to come in for a court date, for example, and instead decided to exercise his right to keep and bear arms in the woods beyond his house; what happened was that the local ambulance squad staged down the road a bit, just in case, and a Fish and Game officer sat in a lawn chair just outside the woods with his radio and said words to the effect of, “Don’t worry.  It’s going to start raining in about three hours, and he’ll come in.”  Which it did, and he did.

SWAT would have probably gone into the woods in force, and ended up killing the guy in question, plus a couple of stray hikers and maybe a bear and a raccoon or two, not to mention shredding all the trees and bushes for a mile or so around.

When this is all over, I suspect that what most people who weren’t directly hit by COVID-19 are going to remember isn’t the virus, it’s going to be The Great Toilet Paper Shortage of 2020.

Also, what a whole lot of primary-school kids are going to remember is The Spring When There Wasn’t Any School and We Got to Watch All the TV and Play All the Video Games We Wanted.

My younger daughter adds, “And a whole lot of Millennials are going to turn into the kind of grandparents who end up ranting at their grandkids about how Nobody Washes Their Hands Properly Anymore, Dammit!”

There’s also been some speculation around here about what kind of fiction is going to be popular in the next year or so. My own theory is that dystopian and post-apocalyptic stories are going to see a decline in popularity – that shoe we were waiting for while we were reading those has dropped, and people are going to be ready for something more upbeat. Remember, the first Star Wars movie came out in 1977, just two years after the end of the Viet Nam war and all the other awfulness of the late sixties and early seventies.

So maybe swashbuckling space opera will come around again. I’d like that.

Because today is Jim Macdonald’s birthday, we drove down to Littleton, NH, to the Little Grill, a Brazilian restaurant whose food Jim – who’s been to Brazil, because during his youth his dad worked there for several years – vouches for. (One of the co-owners has Brazilian roots; how he or she ended up in Coös County, NH, I don’t know, but the oddest people sometimes do.)

Anyhow, on Fridays and Saturdays they have Brazilian Barbecue Night. This is “barbecue” in the Australian, or “things cooked on a grill,” sense of the word, not the American “things smoked or slow-cooked in a pit” sense. The way it works is like this: For a flat price you get your choice of sides from a buffet, and then the waiters keep coming around to your table with grilled meats of all kinds on skewers until you tell them to stop.

If you’re ever in Littleton, NH,on a Friday or a Saturday night, give it a try. But not if there are any vegetarians or vegans in your crowd, because this is not a place for them.

In our current quest to organize the kitchen, the other day I ordered a baker’s rack from Amazon†, and today we moved it into place. This involved relocating the bookshelf full of cookbooks about a foot and a half to the right, which in turn involved first taking all of the cookery books and magazines off of the shelf.

In the course of the relocation, we found the old black-and-white composition book that I first started recording recipes in, right after Jim Macdonald and I set up housekeeping. To our delight, among the recipes was the caramel apple recipe of Macdonald’s childhood, which I had carefully copied into the notebook from the index card I got it on.  We eventually lost the index card, to our sorrow, and after that there were no more caramel apples any more, because the black-and-white composition book was buried under a decade or more of other cookbooks and cooking magazines.

But now we have the recipe again, and I have entered it into my computer’s recipe folder and passed it along to all of our offspring, and now I’m passing it along to you.

(from Sister Mary Rose of Our Lady of Good Counsel, via Mrs. W. D. Macdonald)

Stir constantly until 234 degrees F over medium heat, or until mixture forms soft ball when dropped into very cold water.

Dip apples; does 8 medium apples. If mixture thickens too fast, place sauce pan over hot water. Be sure apples are washed — a waxy coating makes the caramel slip off sometimes.

(Blogger’s note: skewer the apples on thick wooden skewers or popsicle sticks before dipping them.)

†Amazon may be an Evil Empire, but at least it’s an evil empire that provides goods to the north country that would otherwise require a visit to a specialty store down below.

Me: Why, O Cat, when I have gone to the trouble of providing you with a perfectly cromulent catbox and high-quality kitty litter, do you nevertheless persist in using, instead, the floor directly adjacent to same?

Cat: Meow. (If you really understood me, you wouldn’t have to ask.)

Me: Why, O Cat, when I have gone to the trouble of acquiring for you a warm, high-sided, fleece-lined cat bed, which last winter pleased you entirely, do you this winter insist on once again ignoring it in favor of sleeping draped across my forearms while I’m trying to type?

Cat: Meow. (That was last year. Now it’s this year. Get with the program, human.)

Me: Why, O Cat, do you complain vociferously if you do not get your daily ration of wet cat food along with your dry, and then ignore it until it dries out from the winter cold?

Cat: Meow. (Have you considered microwaving it? You don’t eat your food cold, do you?)

And so it goes. I tell myself that they are transitioning from middle-aged cats to older cats, and getting crotchety in their later years.

We live in an old house, by American standards; the core of it — the part where the basement has a dirt floor and the basement walls are granite rocks that probably came out of the ground the basement was dug in, and the support beams are essentially whole logs — was built sometime around 1850, and is, ah, somewhat more permeable to the world outside than your standard suburban no-basement house set on a concrete pad. This means that over the years we’ve played temporary hosts to a variety of local wildlife, including squirrels, chipmunks, and — one memorable winter — an ermine.†

And of course, we always have mice. Most of the time, our cats keep the local rodent population within acceptable limits, but this year, between the long winter and the wet summer and — for all I know — the Trump administration (because lord knows, the orange-haired vulgarian is responsible for most of the rest of this year’s horrors), the numbers have gone beyond what two hard-working cats could be expected to handle.

This isn’t just a problem, we said to ourselves; this is an infestation. Time to call in reinforcements. 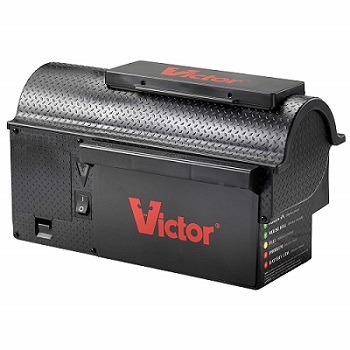 So we’ve gone high-tech. Not for us the cheapie spring traps, or the glue traps . . . we’ve laid out serious money for a Victor Multi-Kill Electronic Mouse Trap. Because damn, this thing works. We’ve had it in place for around a week now, and the score currently stands at Victor Multi-Kill 21, Mice 0.

†We only saw him once, heading across the kitchen floor at speed and disappearing under the closed basement door, but our house was remarkably free of other vermin while he was in residence.