Jim Macdonald has a podcast interview coming up on 1 November. Read more about it here:

going to be a guest on PODCASTUFO. The subject is going to be Betty and Barney Hill.  Those who want to prepare might read this paper:  Amabile, JD, MD, Phyllis E. and Jobe, MD, Thomas H. (1987) “Hypnosis in the Criminal Case: Facts and Fallacies,” Jefferson Journal of Psychiatry: Vol. 5 : Iss. 1 , Article 3.

Or, as they say in the small fishing village where I was raised, “Klaatu barada nikto.”

Over on his blog, Jim Macdonald talks about cards and metaphors.

All too often these days we read or hear in the news, “[Name of politician] doubled down on his earlier remarks…”

So what does it mean to “double down”? 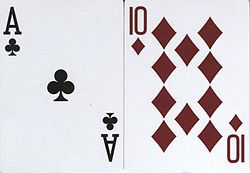 The term comes from the world of gambling, specifically from the game of Blackjack (AKA “Twenty-one”).  The object of the game is to draw cards so that their combined value is a) equal to or less than 21, and b) higher than the dealer’s hand (such that the dealer’s hand is also less than 21).  All cards have values equal to their nominal values; face cards are all valued at 10, and aces can be either one or eleven, at the player’s discretion.  The players are dealt two cards, generally both face up; the dealer initially gets two cards, one face down and the other face up.  After all the players draw the cards they desire, the dealer reveals his or…

Because sometimes they come in matched sets.

Peeve One:  Criteria is a plural, dammit.  The singular is criterion.  (The word is Greek in origin – the –on ending is a clue.)

Peeve Two: Data is also a plural.  The singular is datum.  (This one is Latin.  Again, the ending is a clue – the –um is a neuter singular ending.)

Both of these words are, as is the way of language, in the process of slowly morphing into singular nouns, but they aren’t there yet, and until they get there, some people, like me, are going to bristle up at the usage.

(In principle, I’m a descriptivist.  In practice . . . well, in practice, I get peevish sometimes.)

Every so often, a voice from the back row asks the plaintive question, “In today’s publishing climate, what am I, as an [insert identify marker or lack of one here], allowed to write about?”

You’re allowed** to write about anything you damned well please.

And everybody else – your mom, your best friend, all the other people in your writers’ group, your editor, the New York Times Review of Books, and total random strangers on the internet – is allowed to say out loud and in public what they thought about it.

The thing about the deal, you see, is that it goes both ways.  And a writer who can’t handle the deal is probably better off pulling an Emily Dickinson and keeping their stuff locked up in their dresser drawer for posterity.

*The world is a large and varied place, and I make no claim to pontificate for all of it.

**With the usual narrow exceptions involving nonexistent fires in crowded theatres, and the like.

Eric Owyoung is a composer and musician who performs with his band as Future of Forestry.  Like many another creative type, he also does teaching gigs (hey, my co-author and I have done them; it’s a way to even out the income stream), and he blogs about a recent one here.  It’s got some good insights, not least this one:

Do you have a creative goal like making an album of ten great songs?  If so, the worst idea is to try to write ten great songs. Set a goal to write 60 or more songs… no matter how bad they are, just barrel through them.  Chances are that 10%-15% of them might turn out pretty good. Learn from your mistakes.

Handy advice, I think, for the sort of writer who tends to obsess over crafting the perfect sentence in the perfect paragraph in the perfect story, only to end up crafting all the life out of it.  (The fast-and-slapdash types have, I sometimes think, an easier row to hoe:  They only need to learn how to do second and third drafts.)

And if you’re interested in Mr. Owyoung’s music, you can listen to some of it on his web site.

I keep reading bits of narrative lately where a character who’s walking around aimlessly or randomly is described as “milling about.”

Milling about is not something one person does, or even two people.  Milling about requires at least a small crowd.  The “mill” part of the verb comes from the idea that the random circular motion of such a crowd resembles the rotary action of a mill wheel.

One person alone might pace, or might wander about, but they aren’t going to be milling, even if they’re doing it with a friend.

From the Sibling Cabal’s No Story Is Sacred podcast, this trenchant observation – now with accompanying graphic – is available for purchase on mugs and more at Redbubble.

For the past few days, I’ve been having really bad audio playback problems on my desktop computer – sounds dropping out, sounds being fuzzy, dialogue on videos suddenly becoming harder to follow.  Because we’d just had a fairly large Windows 10 update, and because I’d just said “The hell with waiting for the bad news, I’m going to switch over to the Firefox 57 Beta now,” I went about searching for a cure for the problem in my Firefox and Windows setups, to no avail.

Then this afternoon I finally wised up, and bethought myself of the maxim that when in doubt, one should always switch in a known good piece of hardware and see if the problem persists.  So I dug out my emergency earbuds (I hate earbuds, so I never use them unless I have to; earmuff-style headphones suit me much better, and keep my ears warm in winter to boot) and unplugged my headphones – whereupon I got a good look at the headphone jack for the first time in a couple of weeks.

And lo, the jack was visibly bent several degrees off true.

I blame the cats, who are in the annoying habit of leaping from the top of my desk to the floor and catching the headphone cord with their hind legs on the way.  I will have to buy a new pair of earmuff headphones this afternoon, and I can see a pair of cordless bluetooth headphones in my future as well.  (I can cheap out on regular wired headphones, because they all break eventually and don’t really get much sturdier until you get into the $100-and-up range, but the wireless ones don’t have anything like the battery life I’d need until they’re well into not-cheap territory.  Also, my desktop computer is sufficiently elderly that I’ll also have to throw in a bluetooth adapter to make it work.)

Anyhow – I plugged in the earbuds, and gave the sound another try.

Yep.  Dead jack on the old headphones was the problem source.

It’s always nice to have a path mapped out.

Romance writer Debra Jess, who’s one of my editorial clients, just won a Maggie Award from the Georgia Romance Writers for her novella, A Secret Rose, which (ahem) I edited.

From one Debra to another – congratulations!  (And thanks for the acknowledgement, too.)