Because a peeve is like an itch that you just have to scratch….

Itch, the noun, is a physical sensation:

Starched clothing against the skin can cause an annoying itch.

Itch, the verb, is the act of feeling that sensation:

Joe’s skin itches where his starched collar rubs against his neck.

The verb for what the starched collar is doing against Joe’s skin, on the other hand, is scratch:

Joe’s starched collar scratches the skin of his neck.

Scratch is also the verb for what Joe does to relieve the annoyance:

Joe scratches the itch caused by the starched collar rubbing against his skin.

The starched collar, on the other hand, does not itch Joe’s skin.  It scratches it.  Which makes it itch.  Which makes Joe scratch it.

If you celebrate Thanksgiving with a traditional roast turkey, do you serve it with dressing, or with stuffing?

Butterball (the turkey people, the same ones who run the feast-saving turkey hotline every year) have a page devoted to that very question.  Turns out, as I suspected, that dressing is mostly Southern, and mostly cooked outside the turkey rather than in, while stuffing is more Northeastern, and is usually cooked (unsurprisingly) inside the bird.   My Southern roots show up in this:  In my native dialect, it’s dressing, and gets cooked in a separate dish, the better to have enough of it left over for breakfast the next morning.

(What?  You’ve never had leftover dressing for a post-Thanksgiving breakfast?  You’re missing something good.)

Now that we’ve settled that question, we can move on to which method of preparing green beans is the proper and canonical one:  Are they slow-cooked with bacon and a generous amount of salt, or are they cooked quickly and left unsalted so as to retain their crunch? 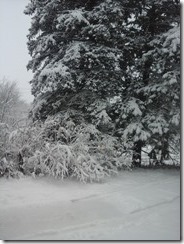 And it snowed some more, after that.  And it’s snowing now.

In weather like this, there really isn’t much to do except stay inside at the computer and listen to the chatter of the road crews on the office scanner work on the various projects currently in hand.

(This is also why the very next editing gig that comes in has got “studded snow tires” already written on its metaphorical forehead.)

In a month that’s been full of bad news from all over, and much unhappiness and partisan animosity, I find looking at that map to be immensely consoling – because whatever else may be going on, there are people all over the world striving to do the same difficult but rewarding thing, and cheering each other on as they go.  The 1,994  writers hard at work in Chicago are doing their bit; so are the 8,046 in Chile and the 39 in Kenya, the 127 in Latvia and the 756 in India . . . and all the rest, all around the globe, working on their individual acts of subcreation.

(Shameless self-promotion time:  If, after you’re finished with your project, you should happen to want it gone over with an editorial/critical eye, please imagine me making a discreet gesture toward the “Editorial Services” link just beneath the header.)

He knows the ways of the Force. Also the Elmsley Count, the Double Lift, and the Regular Pass.

Or, bits of loose mental fluff that were never enough to make a whole post by themselves:

The thing about obsolete tools for critical argument is that nobody ever bothers to box them up and put them away after acquiring a shiny new set. Instead, they’re left lying around out in public where untrained amateurs can pick them up and use them for god-knows-what.

I’m not sure whether the Cult of the Western Canon is the result of the tendency of (mostly male) literary critics to turn everything into a dick-measuring contest an emergent property of the patriarchal nature of western institutions of higher learning, or the natural consequence of there only being room in a two-semester survey course for so many books.

(It’s always a bit unsettling to open a new edition of a familiar anthology textbook, and see which authors have been thrown out of the lifeboat in order to take aboard someone new.)

If you want characters to generate plot and conflict, they need to have shadows in them to hide stuff and angular bits to catch on things.

Maybe I’ve been reading too much paranormal fantasy lately, because you wouldn’t think this would be a thing I’d run into often enough to make me peevish.  Nevertheless, I do, and it does.

Listen to me, people.  Nephilim is not – I repeat, not – a singular noun.  It’s a plural noun (that –im bit is the marker), and the singular is naphil.

The same goes for seraphim and cherubim.  They’re plurals, too, and their singular forms are seraph and cherub, respectively.

If you’re going to mess around with Judaic and/or Christian esoterica, at least get the words right.  (Or as right as reasonably possible, anyhow, given that we’re talking about words that wouldn’t have been written in the Roman alphabet to start with.)

My candidate didn’t win. But as Rocky would say, “she went the distance,” and maybe that was the best we were truly likely to get at this point in time. We’ve just finished with two terms of a precedent-shattering presidency, and I’m not surprised, in retrospect, that the elastic band wasn’t up to stretching out to another one.

Granted, it’s still no fun to get so close you can almost taste it, and then not get it anyway.

Jim Macdonald was over at Dixville Notch for the minute-past-midnight voting, and reports on the results of it here.

…(and, as I write this, seven and a half hours, but who’s counting) until the US presidential election is over, and whatever comes next, comes next, but in any case I should stop getting multiple daily polling calls and stacks of four-color glossy political ads.

Meanwhile, to keep us all going, a recipe – not a simple one this time, but one that I got from my father quite a while ago.  It’s become my go-to recipe for when somebody phones up and says, “You will bring a cake to the bake sale, won’t you?”  Obligatory writing reference:  This is kind of like being asked to contribute a story to a charity anthology, except that you can’t keep re-using the same story from one anthology to another, but you can definitely make the same cake every time.

Anyhow, this is Marvelous Mississippi Mud Cake (or Triple-C Chocolate Cake, as I usually call it up here in far northern New England, where the marvelousness of Mississippi mud – providing, as it does, “the richest land this side of the Valley Nile” – is not exactly common knowledge):

Generously grease  a nine inch Bundt pan – 10 cup capacity.  (This is a place where the recipe betrays its age and regional origins – I don’t think recipes say “grease” any more.  My father would have used Crisco; I generally use Baker’s Joy spray.)

Position rack in center of oven and heat oven to 325 F.

Melt chocolate in the top pan of a double boiler over hot, not boiling, water.  (Another indication of this recipe’s vintage.  These days, I melt my chocolate in the microwave.) Remove chocolate before it is completely melted and stir until smooth.  Set aside.

Sift together the flour, salt, and baking soda and set aside.

In a two cup glass measure, dissolve the instant coffee in the boiling water, stir in the cold water and the bourbon or other flavoring and set aside.

Beat the butter with vanilla and sugar in the large bowl of an electric mixer fitted with a paddle beater until  well blended and smooth. (Or, like me, use a handheld electric mixer because that’s what you’ve got.)  Beat in the eggs one at a time, beating after each addition.  Beat in the extra yolk and the sour cream.  Scrape down the bowl and beater.  Add the melted and slightly cooled chocolate and beat until the batter is smooth

Remove the bowl from the stand.  (Obviously, if you’re not using a stand mixer, you can skip that step.) By hand, using a spoon or rubber spatula, stir in small amounts of the flour mixture and the coffee-bourbon liquid.  Beat until the batter is smooth;  it will be quite thin.  Don’t worry if the batter looks slightly curdled.

Pour the batter into the prepared pan.  Bake until the cake top is springy to the touch and slightly cracked looking and a cake tester inserted in the center of the cake comes out clean — about 65 to 70 minutes.  Do not over cook.

Cool the cake on a wire rack for 15 minutes.  Top with another rack or plate and invert.  Lift off pan,  Cool completely.

This makes a decidedly grown-up chocolate cake.  Treat yourself; after the campaign season we’ve all had, you deserve it.