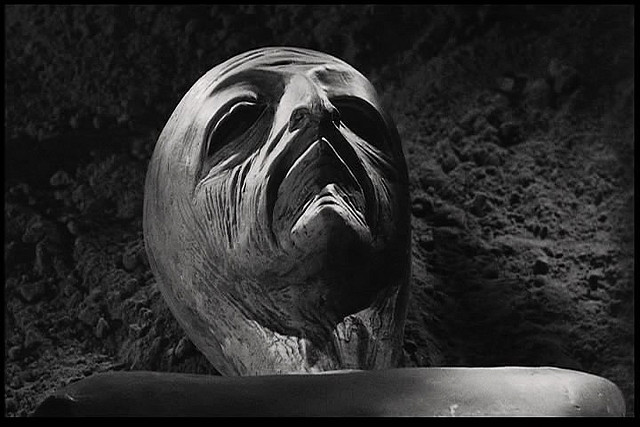 Why are they grey?  Perhaps because Earth vs. the Flying Saucers (1956) was in black-and-white….

Check out PodcastUFO, where I’ll be talking about my take on Betty and Barney Hill’s abduction, on Wednesday, 29 November.

(Immediately following Granite State Magicians there will be a fellow doing a Harry Potter magic show, so plan to stay late.)

And so is my Thanksgiving/Winter Heating Season quickie sale, which ends at midnight on Sunday the 26th of November.

As always, you can make the purchase for yourself or as a gift for a friend, and can collect on it either right away or at a future date.

Meanwhile, I have to trundle out and purchase this year’s turkey and all the rest of the traditional Thanksgiving oddments.

And in honor of the season, a reprise of my 2012 posting of The World’s Easiest Cranberry Sauce recipe:

Put cranberries into a small-to-medium-sized saucepan.  Take a moment to make certain there isn’t a twig or a pebble in there by mistake.  (I’ve never encountered one, but everybody says to check, so somebody must have, at least once.)

Add the water and the sugar.  Stir to combine.  It’s probably a good idea to use a wooden spoon, because you’re going to want to stir the mixture some while it’s cooking, and it’s going to get hot.

Put the saucepan on the stove and turn the burner up to high.  Bring the cranberries-water-and-sugar mixture to a furious boil, stirring every now and again.  Keep on boiling it until the cranberries have all popped.

Remove from heat and pour the sauce into a bowl or tureen or what-have-you, so long as what you have isn’t going to melt from the heat.  Put the saucepan in the sink and run some water into it, so that you don’t end up having to remove the cold solidified remnants with a chisel later.  Remember to turn off the stove.

Serve the sauce with turkey, or with pancakes, or with whatever seems good to you.  It’s good warm or cold, either way, and will keep for a day or so in the refrigerator.

Some people fancy this up with lemon peel or other seasonings, but simple is easier and works just fine.

Here are the signs and symptoms:

Jim Macdonald has his own take on an American classic….

Was Uncle Tom’s Cabinwritten by a feminine hand?

No, it was written by Harriet Beecher’s toe.

For years, pretty much all I knew about Uncle Tom’s Cabin, the novel, was that it existed.  Important in the social history of the United States, sure.  Important in American literature, sure.  But the plot?  Nope. All I knew of the plot was what I’d gleaned from watching The King and I.  So, recently, I decided to correct that lack.

Over the course of a couple of trips to Boston and to Burlington I listened to an audio recording of Uncle Tom’s Cabin.

The first surprising thing (to me, anyway) was that the scene of Eliza crossing the Ohio on the ice floes wasn’t the climax of the book.  It was an incident in Chapter Seven (out of forty-five chapters).

I hadn’t looked at UncleTomcriticism beforehand…

In honor of Nanowrimo, and of the onset of the winter heating season,† I’ll be running a seasonal sale on editorial and critique services from now through the end of Thanksgiving weekend.  My usual rate of $1500 for a line-edit and critique on a standard-weight novel goes down to $1000 for the duration, and rates for epic-sized doorstops will be similarly discounted.

As always, you can purchase a gift certificate – as a gift for a friend, or for yourself – to be redeemed at a later date.

†The snow that fell last Friday? Is still here.

The first snow of 2017, in our front yard this morning:

It’ll probably all be gone by this afternoon, but meanwhile . . . brrrr.

This post brought to you by the winter electric bill, aka the bane of my existence, and by Dr. Doyle’s Editorial Services, always open for business in the name of slaying the kilowatt monster.

Fantasy writer Jo Walton is running a Kickstarter for Scintillation, a small convention to be held – provided the Kickstarter succeeds — in 2018 in Montreal.

Jo (who deservedly often has Homeric epithets like “acclaimed” and “award-winning” affixed to her name) ran the Farthingparty convention in Montreal from 2006 to 2014, before time-management issues and the stress of worrying every year whether or not the convention would draw enough members to break even brought the run to an end.  She’s coming back now with the new Kickstarter model, which she explains in detail on the project page.

I really really want this Kickstarter to succeed.  (Yes, I’ve already thrown in my mite, and will throw more as more becomes available.)  Farthingparty was the closest convention to where we live,† and I think we made every single one of them, even the one which we had to do as a Saturday day trip because we were moving one of our offspring into their dorm in Boston on Sunday.  I’ve missed it ever year since it ended, and having a new convention we could attend in Montreal would be a wonderful thing.

†Yes.  We live that far north in New Hampshire.

Where to find me this weekend:

Friday I’ll be in Bradford, Vermont, for the Midnight Madness.  I’ll be doing street magic from 6:00 pm to 10:00 pm.  Saturday and Sunday I’ll be doing walk-around at the Vermont Steampunk Expo in South Burlington, VT. Due to the recent storms in the northeast and massive power outages, the scheduled Podcast UFO for tonight has been delayed.  I’ll let y’all know the rescheduled date as soon as I know it.