It’s always good when a student, or a client, does well.  Debra Jess was one of the workshoppers at Viable Paradise XVI, where I was one of the instructors, and after that, she was one of my editorial clients.  And I’m pleased as punch to say that her novel, Blood Surfer, has won the National Excellence in Romance Fiction Award (NERFA) in the Paranormal and Futuristic category.  Blood Surfer was also a finalist in the Best First Novel category.

Needless to say, I am tickled pink on her behalf.

Applications for  the Viable Paradise Writers’ Workshop are still open for this year, but the door shuts on June 15, so if you’re interested, better get your submission ready soon.  Viable Paradise is an intensive one-week residential workshop for science fiction and fantasy writers, held annually in the autumn on the New England island of Martha’s Vineyard.

Full disclosure:  Jim Macdonald and I are instructors at the workshop.  So are several other really fine people.  And instead of getting us one after the other like a parade, you (if you’re a student) get all of us at once, interacting not only with your fellow students but with each other – “This story is the wrong length; it needs to be shorter!” one instructor will say.  ‘’This story is the wrong length; it needs to be the first chapter of a novel!” another will respond.  (From which the takeaway lesson is usually that your story is indeed the wrong length, but it’s up to you to decide which way to fix it.  Also, that short story writers tend to think that problem stories need to be shorter, while novelists . . . you get the idea.)

— and about editing, for that matter — is the the opportunity to point with pride at a student’s (or client’s) success.

On this occasion, I can bask in the reflected glow from Viable Paradise alumna Fran Wilde’s winning of the Andre Norton Award for YA science fiction at the Nebula Awards just past for her novel Updraft, which also won the Baltimore Science Fiction Society’s Compton Crook Award for best first novel.

And as if that weren’t enough illumination, there’s a further glow coming by way of Debra Jess, another VP alumna and a Dr. Doyle’s Editorial client, for her novel Bloodsurfer, which is a finalist in two categories (best first novel and best paranormal) of the Greater Detroit Romance Writers of America Booksellers’ Best Award. The winners will be announced at this summer’s RWA convention.

Needless to say, I’m tickled pink for them both.

It’s been a long winter.

Also an unseasonably warm one, which is never good for the local economy up here in the wilds of northern New Hampshire.  And I’ve been mostly quiet, for which I apologize – I took a wrong step at the bottom of an unfamiliar flight of stairs in the dark, and ended up straining a muscle in my back.  The alternative would have been slamming my head up against the corner of the table next to the stairs, so I can’t really regret the spine-wrenching contortions I put myself through on the way down, even if they did give me over a month’s worth of sore muscles.  In any case, there’s something about not being able to sleep comfortably for several weeks that turns one’s get-up-and-go into more of a lurch-to-one’s-feet-and-shamble.  The whole thing put me at least a month behind on everything, and I’m still digging my way out from under the resulting backlog.

A couple of things that happened while I was in Shamble Mode:

Our story “One Night in Bavaria” came out in the Tom Easton and Judith Dial anthology Conspiracy! , from NESFA Press.

The Viable Paradise Science Fiction and Fantasy Writers Workshop opened up for applications.  This year’s workshop will be held at the Island Inn on Martha’s Vineyard, from  Sunday, October 16th, through Friday, October 21st, 2016.

A thing that will be happening next month:

The contributors to Conspiracy! (some of them, anyway – time and distance happen to us all) will be doing a signing at Toadstool Books in Peterborough, New Hampshire on the 23rd of April.  Watch this space for the exact time.

Finally, a trio of links for your amusement:

An article on American Sign Language and its relation to French Sign Language, and the Philadelphia ASL accent.

An article on the New York Public Library’s Erotica collection.

And finally, a link to the University of Arkansas’s* new on-line archive of its Ozark Folk Song Collection. The UofA was my undergraduate alma mater, and I was fortunate enough to take a folklore class with Mary Celestia Parler, the scholar primarily responsible for collecting the music in the archive, near the end of her teaching career there.  Having this major resource made available on-line to the public is a wonderful thing – go Razorbacks!

*Yes, that is how you form the possessive.  The state legislature officially said so.

A timely reminder:  applications for this year’s Viable Paradise workshop close at midnight on the 15th of June – that is to say, this coming Monday.

If you’re on the fence about applying, time to hop off and get your application in the mail!

This past Saturday Jim Macdonald and I went down to Boston to see Penguin Magic’s traveling expo, which was there that day.  The route and the area were familiar to us, since the Readercon site is in the same general neighborhood, but this time it wasn’t science fiction that brought us there, but Jim Macdonald’s other freelance avocation, stage magic – which isn’t as far a cry from writing sf and fantasy (or writing in general) as one might think.  Both jobs involving entertaining, and sometimes enlightening, the public by creating believable illusions . . . and both of them take a lot of hard work and practice.

Jim had a good time watching the demonstrations.  I don’t do stage magic myself (my job, in my role as Magician’s Significant Other, is to be the test audience and general critic for new tricks, old tricks, and routines under 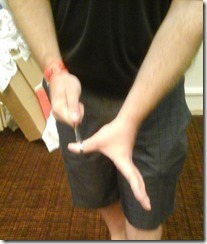 development), but I had a good time anyway.  The event had a lot in common with various other specialized meetups I’ve attended or spectated at in my time – rock and mineral shows, mustache-growing contests, sf and fantasy conventions, and yes, writer’s workshops.  There’s a peculiar pleasure to be had in the company of a bunch of other people who all share the same obsession, and who can be counted on to understand why a person might spend all afternoon working on a new method of cutting a deck of cards, or trying out different ways of punctuating a particular sentence.

(Do I want a comma here?  Would a period and a new sentence work better?  How about two independent clauses and a semicolon?  No, that doesn’t work – the heck with it, why don’t I just cut the whole thing?  Can’t do that either, dammit; it’ll ruin the pacing, and besides, that’s an important bit of information I’m trying to slip in.  Let’s look at it with the comma again….)

As is often the case at these specialized events, there’s also the pleasure of cruising the dealers’ tables and trying not to spend more money than one had absolutely budgeted for the purpose.  The setup to the left there belongs to Diamond’s Magic, which is local to the area (up here in the north country of New Hampshire, we count Boston as “local” for certain purposes. Montreal is actually closer, but we don’t need a passport to get to Boston, or at least not yet.)  We highly recommend them for all your magic-related shopping needs.

And a final note:  speaking of specialized groups and shared obsessions and the company of other people who understand why that comma is important enough to spend an afternoon fretting over it:  The application period for the Viable Paradise workshop remains open until 15 June.  If you’re planning to apply, why not get your application in now and avoid the last-minute rush?

Applications are still open for the Viable Paradise Writer’s Workshop on Martha’s Vineyard, running this year from October 18-23.  If you’re definitely planning to apply, help spread out the admin workload by going ahead and doing it now; if you’re still on the fence about it, let me urge you to give the workshop a try.

It occurs to me – as it does every year about this time – that not everybody outside of New England can be counted on to know that Martha’s Vineyard is an island off Cape Cod, accessible by Cape Air and the Martha’s Vineyard  ferry.  (Or, I suppose, by your private plane or personal yacht, should you have one.)  As such, it has excellent seafood, five picturesque lighthouses, and glowing jellyfish.

Applications close on the 15th of June; get yours in now and avoid the rush!

Which means that applications are now open for Viable Paradise XIX, being held this year on 18-23 October at the Island Inn on Martha’s Vineyard, Massachusetts.

Come for the workshop; stay for the lighthouses, the luminescent jellyfish, and the really excellent seafood.

Also:  I’m currently putting together the January issue of my newly-inaugurated newsletter.  If you’re interested in receiving what should be a monthly e-mailing, you can sign up via the link in the sidebar, or click on it here.

The Viable Paradise workshop is over for another year.  We had writing and music and pancakes and jellyfish and a sky full of stars.  (Also, if you were me, lobster tacos at the Lookout restaurant, and I just have to say, that was one of the best things I’ve ever tasted done to a lobster.)

The photo, by the way, is of the Gay Head Lighthouse on the Cliffs of Aquinnah — one of the five lighthouses on the island.  (The others are East Chop, West Chop, Edgartown, and Cape Pogue.) It’s called “Gay Head” because the headland there is a multi-hued clay cliff.  Obligatory literature reference:  The harpooneer Tashtego, in Moby-Dick, was a Native American from Gay Head.

If you wanted to apply to VP this year and couldn’t make it, next year’s applications open on 1 January 2015.

If posting is kind of sparse for a week or so, it’ll  because Jim Macdonald and I are down on Martha’s Vineyard, where we’ll be teaching at the Viable Paradise sf/fantasy writer’s workshop.

As usual, we expect to learn as much as we teach.  There’s something about hanging out with a bunch of fellow writers and talking about technique and craft and what Edward Gorey so aptly referred to as “the unspeakable horror of the literary life” that works that way.