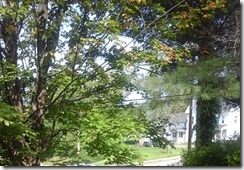 That tree in the front driveway that I was talking about the other day is now showing its first patch of color.  Summer is now officially (for local household values of “official”) transitioning into autumn.

We have also recently taken in our first batch of gift zucchini. Likewise a couple of locally-grown tomatoes, which promptly went into BLT sandwiches.  Raising tomatoes up here in northern New England is a triumph of hope over experience every time; they have to be started indoors, and once they’re out in the garden, it’s a race between them and the first frost.

(A harbinger, by the way, was originally a person who went ahead of an army to arrange for lodgings, going back through Old French to Old Saxon to a couple of root words heri and berga – meaning, respectively “army” and “a fortified place.”  The latter is the same root that shows up in a lot of place names, since for a long time, historically speaking, “city” and “fortified place” were more or less synonymous.)

View all posts by drdoyleeditorial

One thought on “Harbingers Ahoy!”

This site uses Akismet to reduce spam. Learn how your comment data is processed.