Things you can have if you travel up this way.  Possibly #1 in an ongoing series, depending upon how much I get out of this house before winter comes back around.  (The Starks of Winterfell could have a summer home up here, I suspect, and nobody would even notice because they’d fit right in.  “Winter is coming.”  “Ayup.  Got your wood in yet?”)

Anyhow.  Here’s a photo of that pHtea Jim Macdonald blogged about in his post about the Vermont RennFaire:

That’s white tea, chamomile tea, and yerba mate in the photo; the black tea had already been consumed by me the night before.

And here is breakfast at the North Country Family Restaurant in Groveton, New Hampshire, where they make their own corned beef hash.  (As does any diner in northern New England with a shred of self-respect.) 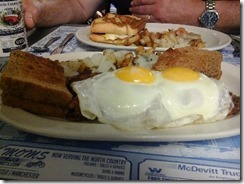 That’s two eggs sunny-side up over corned beef hash, with homemade toast and a side of hash browns.  (Well, up here they call them hash browns.  As a transplanted Texan, I feel obliged to point out that they are actually country fries, because proper hash browns are shredded, not cubed.  Nomenclature aside, though, they’re done well, and come with or without onions at the diner’s preference.)

The other breakfast, in the background, is a fried egg sandwich made with French toast.  I have it on good authority that it tastes just fine.

View all posts by drdoyleeditorial

One thought on “Food and Drink in the North Country”

This site uses Akismet to reduce spam. Learn how your comment data is processed.